Clown Doctors: Shaman Healers of Western Medicine makes the argument that the Big Apple Circus Clown Care Unit — a troupe of performers who dress as clowns in white coats and attempt to brighten the outlook of various patients in hospitals — operates in essentially a shamanistic role.  “There is not only superficial resemblance — weird costumes … similarity in the meanings and functions of their performance.”

The inclusion of clowns in pediatric hospitals reflects growing interest in and respect for alternative, or more correctly, complementary styles of healing.  Western medicine is oriented toward allopathic treatment of clinical symptoms, while traditional non-Western healing more frequently addresses a patient’s social condition and construction of the illness experience.  One cannot deny the efficacy of physicians compared to shamans, but integrating doctors with complementary practitioners such as clown doctors may render Western medicine even more effective.

Although the participant observational experiences described in this article are, by and large, both powerful and poignant, the fact remains that this article does a disservice to shamanism.  It elevates biomedicine unconditionally above indigenous medical practices, while simultaneously implying that shamans exist solely as an analog of clowns, or some sort of theatrical performer.  Although I agree with the author that one cannot — in certain circumstances — deny the efficacy of physicians, in other circumstances one absolutely can.  Modern medicine (whatever that means) has many failings, and we simply need to engage in a brief thought experiment to expose these failings: imagine medicine 25 or 50 years ago, and consider the many procedures considered advisable at that time, if not even then considered state-of-the-art, and now consider how many of these are presently known to be of little clinical benefit, or even harmful.  Medicine today is likely performing a similar number of less than effective procedures, but we won’t know which ones for several decades.

Medicine in America, as well as health overall, has undergone an unprecedented process of commodification in the last century.  Health, we are to believe, is now a product you can purchase from a qualified sales person — he’s the guy in the white coat, with the stethoscope and prescription pad.  Although I don’t endeavor to spend this blog posting tracing the social transformation of American medicine, I would like to point out the manner in which many of the items we intimately associate with physicians have become something of a costume.

The Clown Doctors article more or less contends that these clowns practice their tricks, don white coats, and although they may not have any biologic intervention they can effect, through patient interaction they still improve outcomes.  Isn’t that last part (interaction to improve outcomes) called “bedside manner”?  In the following few quotes I have replaced the words “shaman” and “clown” with “doctor” just for fun …

“Like traditional healers in many societies, doctors wear unusual costumes.”  “The doctor’s rituals reinforce social roles.”  “The power of placebos lies in the power of symbols.”  “Like the shaman role, the doctor figure transcends culture and is nearly universal.”

I would argue that to equate shamans with clowns is to slander shamans, and to miss the larger picture.  Shamans are not clowns — shamans are doctors but without access to microscopes.  While it is true that biomedicine affords the possibility of sophisticated quantitative methodology for identifying disease and pathogens, few doctors are running their own lab equipment.  To the patient, the largest part of the biomedical experience may actually be the ritual of “seeing the doctor.”  This process involves intricate costumes (white coat, stethoscope, etc), sometimes laying of hands, and often arcane instructions for herbal remedies (recorded on ceremonial paper).  This looks a lot like shamanism to me.

Although paper magazines seem to be on their way out, when I think of old photo essays I often think of Time Life. For curiosity sake, I wanted to see what doctors 60 years ago might have looked like. 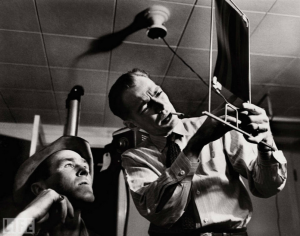 Did they wear the white coats?  Carry the stethoscope around their neck at all times?  Here is a famous Life photo essay on a country doctor from 1948.  It’s hard to tell which is the doctor and which is the patient.  No wonder doctors today need clowns to help level out the power dynamics.

If anything, I think this article should be making the argument that for what shamans lack in their ability to, say, identify mycobacteria, they make up for with forms of social support and understanding of the patient experience (including more level power dynamics) that most Western doctors can only find with addition of some adjunct practitioner (namely the clown doctor).

The entire 1948 photo essay is quite interesting actually (and now includes a score of photos not originally published).