The Stranger had an interesting article last week (thanks to my friend, Adam, for mentioning it to me), looking in some depth at the allocation of state tax monies to each county.  The upshot of the article is that each county pays a certain amount of taxes, and some counties receive back a disproportionately high (or low) amount.  What’s surprising is that the counties that are staunchly republican — populated with people who call for budget cuts because inner city schools and welfare and food stamps (etc) are a drain on the taxpayer — are the ones receiving the disproportionately high amount of social service spending.

The inner city schools are surprisingly efficient.  Seattle School District spent only $6,000 per student, versus more than $40,000 per student spent in some of the “red” counties.  Tukwila School District, the most diverse in the nation, spends $9500 per student.  The article points out that King County, with the largest concentration of urban poor, still drew half the amount of DSHS funds per capita as compared to many eastern (and republican-voting) counties.

So the question that this article seems to pose, at least to me, is whether the 70%+ of residents in these ‘red’ counties are actively voting against their own interests.  Rhetoric of self-sufficiency is one thing, but that rhetoric doesn’t match the numbers.  So is it just the 15 or 20% of blue residents in these counties soaking up all of the money doled out from Olympia?  Somehow I doubt it. 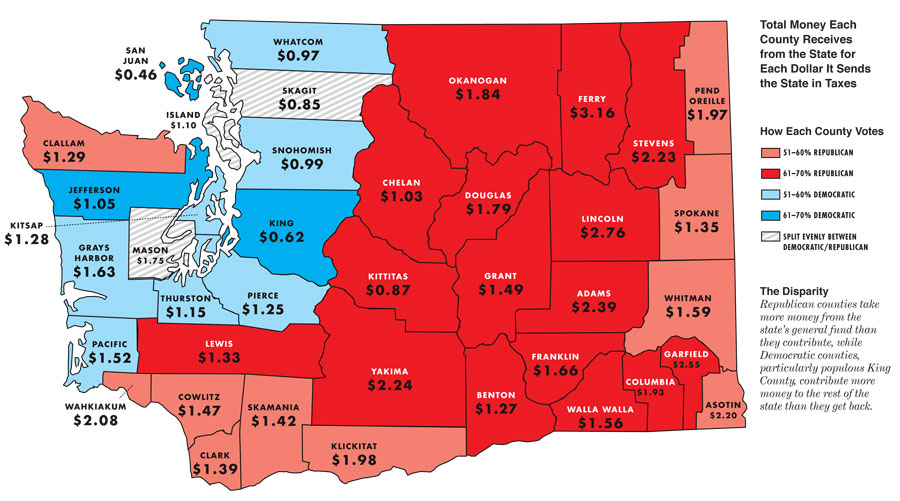