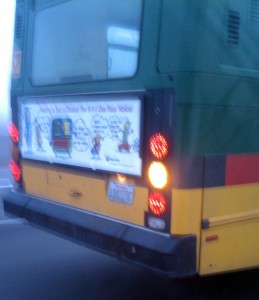 Sometime last year, while sitting in traffic behind a bus, I saw a mobile-billboard that read, “Texting is not a choice, for 9-1-1 use your voice!” The bus turned down another street before I could snap a photo.  A week or two ago I saw the same billboard again on the freeway, and took a blurry cellphone pic to share.

So why is this in my blog?  911 texting is a valuable service for those in the deaf and hard-of-hearing community, not to mention there are other situations where it can be helpful, and it’s frustrating that Seattle doesn’t have this functionality for its EMS system.  What’s more frustrating, though, is that this billboard seems to be created by people who are completely unaware that not everyone has a voice — it’s just plain insensitive.

I doubt you’d see a King County sponsored billboard that admonished you to “use your legs!” and so that’s really the root of my issue with it.  I am sure text EMS will eventually come to King County, and until it does I have no issue with letting people know its status, but we should do that in a sensitive and inclusive way.