Recently presented data show that the more deadly (ER and PR negative) type of breast cancer tumors are more common in women of color. Black women had more than double the rate of the more deadly type of tumor (compared to whites) and Hispanic women had more than a 50% increase compared to whites. Other studies have previously noted that white women are more likely to develop breast cancer, but women of color are more likely to die from the disease (see image at left), so this sheds some light on previous findings. 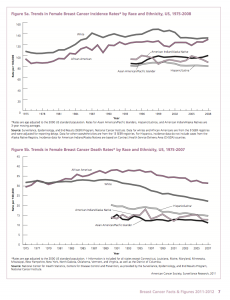 Results presented a month or two earlier from the same data analysis also indicate that women of color (blacks and latinas) in the study had double or more the prevalence of “high stress” as compared to whites (and the authors speculate that high stress prior to the cancer may have been a factor in its formation, but are careful to say they have no data on pre-cancer stress levels). Another study by the same author found a substantial delay in seeking care for a breast lump (16% waited 3 months or more), and that women of color and lower socioeconomic status were more likely to have misconceptions, less likely to have access to care, and thus more likely to delay.

Referring to the first link above, one of the scientists who analyzed the data said, “There is a disparity in the biological aggressiveness of breast cancer. We tend to think about biological differences being due to differences in genes, but tumor biology can be affected by social or behavioral factors that are associated with socioeconomic status. Our study highlights the importance of the social environment in influencing tumor biology and ultimately influencing disparities.”