Paul Farmer is an anthropologist and physician, head of the Department of Social Medicine at Harvard University, and United Nations Deputy Special Envoy to Haiti.  He founded Partners in Health in Boston in the 1980s along with Jim Kim, and its Haitian counterpart Zanmi Lasante.  To say Farmer is an expert on Haiti, Global Health, and Infectious Disease would be a gross understatement.  He’s written a very digestible article on Haiti that seems extremely germane to understanding Haiti in the days leading up to the Jan 2010 earthquake, and Tracy Kidder’s book on Farmer, Mountains Beyond Mountains, is not only inspiring and brilliantly written, but also required reading for many (if not the majority?) of undergraduates in the United States. 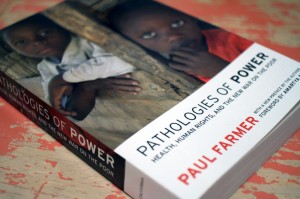 This is a fairly high level (read: dense) book, although I found it to be quite readable, both because Farmer is a talented author, and because it is replete with sad but illuminating first hand accounts of structural inequalities throughout the world.  Farmer delves many times into the “preferential option for the poor” aspect of liberation theology, and those who are familiar with Farmer will know this phrase is inseparable from his work.

I get the sense that Farmer knows what he means to say and assumes you do too.  By this, I mean, he does not talk down to his audience.  On page 129 he says, “[m]anaging inequality almost never includes higher standards of care for those whose agency has been constrained, whether by poverty of by prison bars. In Chapter 7, I argue that precisely such a strategy should be used within prisons.”  I am not saying he doesn’t argue this in Chapter 7, but if I redacted the chapter number from the sentence above, some readers might legitimately have difficulty discerning in exactly which chapter Farmer advocates for this.  The problem, and gift, of Farmer is that he operates on a superhuman level.  For those of us mortals, this means you might have to read the book more than once to soak in the nuances of Farmer’s thought processes.  I am not ashamed to admit that I can see nuances of some of his statements are still lost on me; one day I hope I will ‘get’ them all.

The book is replete with statistics to the point that it seems underwhelming to simply call it “information dense.”

Some random sobering statistics culled from sections of the book upon which I wore out my highlighter:

As the cover says, this is “an angry and hopeful book.”  Although it is dense with data and Farmer’s heartbreaking experiences, it lays out a clear and seemingly ‘too simple’ path for fixing the world’s ills: caring for and empowering the poor.